Wow…. In looking back at the last time I’ve written a post, I’m a little ashamed to see that almost a year has gone by.  I’m certain that many might have though the blog forgotten, but trust me in that nothing could be further from the truth.  I’ve had a lot going on between my last post and this post – much personal, much arcade and a fair amount that lands somewhere in between…

One thing that is for certain is that BrokenToken.com is alive and well.  I’ve had many, many situations where I’ve wanted to write a post about current news, reproduction finds, or movement within my own collection and my ongoing game room build out, but always deferred due to numerous other priorities.

Fortunately though, I’m getting more of a handle on things, and the future is looking a lot better in regards to content and post generation.

The main question that I’ve gotten is “what’s been going on?”.  To make a series of really long stories short and sweet, it boils down to this:

This is the one that I’ve struggled with the most.  I have spent a lot of hours getting the cosmetics, power and “flow” of my game room situated.  I’m just about done, and have included a couple of current ‘teaser’ pictures so that everyone can see what I’m up to.  I’m wanting to post up a series of ‘as it was being done’ articles so that I can document the build-out for others to see.  I’ve still got a bit more to do, but I’m rounding the corner on this.  And yes, there is a red Donkey Kong to go in the Nintendo row and some pretty massive ‘clean-up’ of the DK jr. and the Donkey Kong 3 in the near future.    Needless to say a *KILLER* Nintendo row is my goal… 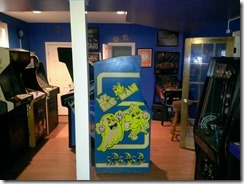 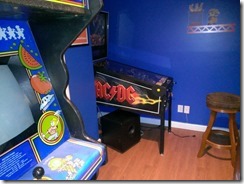 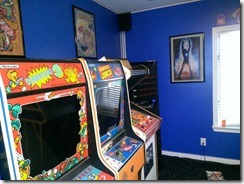 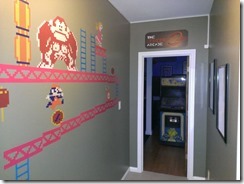 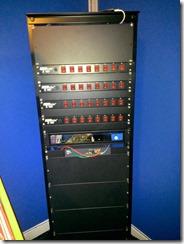 I have a whole post in draft dedicated to the build-out on this hand-crafted beast.  The good thing is that it allows me to control the power of each game individually, as well as control lighting and the game room sound system.  I do need some magnetic game marquee signs to help me keep track of which game is on which switch, but it works and works well as it is.  Besides, it looks cool in the dark!

Yep – that’s a fair question.  My short-term plan is to work through this year’s Louisville Arcade Expo and provide some great coverage for that event.  Next up will be this year’s CAGDC tournament and then re-organize my content and decide what to talk about first and then put myself back into a regimented posting schedule.  That should get me back on track in that regard.

There’s also a collaborative project that I’m working on with another local collector, but it’s way too soon to talk about that more so than saying something is in the works….  Just know that reaching out to people in a new way and hopefully growing the brand as a by-product will come together in a sustainable way.  My goal is to be able to talk more about that in the coming months, as well.

One thing that I’ve found really useful to supplement the blog is the Brokentoken.com Facebook page page.  I’ve been using it as a ‘microblogging’ platform and have found it convenient for posting the ‘in between’ types of content that I want to share with the arcade and pinball community, but still make sure that I can get back to at a later date and expound on, if warranted.  The Facebook page content is usually more time-sensitive in nature, so it’s always a good option for quickly getting some info out.

With that, I’ll go ahead and wrap this up.  I appreciate the notes of interest and concern.  All is good and getting back on track.  In the meantime, please consider becoming a fan of the Facebook page and that way you can stay up-to-date on happenings between my formal posts.  Also considering following Brokentoken on Twitter as well, and catch more between-the-posts action.