It’s taken us a bit to recover, but we’re back with a vengeance purpose now that we’ve gotten a few naps under our belt and tossed on some clean Superfriends Underoos!

This episode is a recording of the live show we streamed on Friday night, March 3rd 2017.  We managed to rotate quite the number of guests in/out of the booth during the course of the livestream (list below) and what more can we say than “we had a blast, and it shows”.

The Louisville Arcade Expo has continued to grow year-after-year and is is hitting a really good stride now in both size, attendance and the sheer amount of content available to take in over the course of the show.  The growth has lead to a brand new floor layout, a significant uptick in the number of games available to play, more seminars in a dedicated space and new segments of the hobby/genre being represented at the show.

We recorded all of the relevant seminars and will be releasing both the audio and video from them in the next few weeks, as well.  We’ll have the audio in upcoming episodes and the video will be on our Youtube channel.

With that – grab a cold juice box, sit back and enjoy a great night of fun at the 2017 Louisville Arcade Expo! 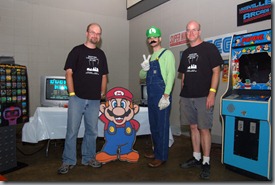