It’s neat what can come of a series of totally random situations all boxed up together…. let me set the stage for a bit, then I can move on to what is the most rewarding part of the collecting/restoring/playing hobby for me…

Last week I picked up an Asteroids Deluxe.  It is in great shape, but the seller ran upon some hard times, ran out of cash to finish the restoration and thus needed to move it to recoup some of the losses .  The only real problem with the game is that the G08 monitor chassis wasn’t anywhere to be found as the seller had sent it out to Chad @ ArcadeCRT to have the chassis completely “gone through”.  Seeing as how the seller seemed to be trustworthy and the cabinet was in great shape otherwise (i.e. no water or cabinet damage, good sideart, etc.),  I went ahead and bit on it, rode up to Indy and did the pick up and headed back here to Louisville with all the parts in tow.

One call to Chad and a quick credit card swipe later, and the rebuilt G08 chassis/frame/flyback/yoke was on its way to me.  The only issue that I have at this point is that I’ve never installed all the monitor components onto a bare tube before, so I need some  reference – preferably from an identical machine, if possible.  I contacted another Asteroids Deluxe (ADX) owner here in Louisville – fellow KLOV & CoinOpSpace member Jason Bradley (jbbradley) – to see if I could get some inside cabinet pictures of his ADX so that I would have a properly mounted and assembled monitor to model off of.  Once I’m ready to put everything back together, I’ll do another blog post, as I figure it would be great to document the reassembling of a vector monitor from the tube up.

Jason had a much better idea though – instead of staying at his place, why not go to Zanzabar and play some games and check out their ADX – essentially kill a couple birds with one stone.  ZBar owner Antz Wettig is super cool about this kind of thing, so we met up there, got the ADX pictures we needed, and I checked out the current game lineup.  What’s so neat about Zanzabar is that Antz has enough titles both in the bar and in the green room to rotate stock around.  Because he has a pool of games to work with, the lineup always has a fresh feel to it.  Games and pins move around and the layout is always changed up.  I appreciate that… keeps everything looking and feeling ‘alive’.

If you are curious about the current vid and pin lineups, check out these links here on the site.  Jason is keeping the tables up-to-date, so they are good to reference before heading to the bar, as it might help you plan out what is of interest.

Check out a few of the pictures below that I took there from last night.  You’ll see a few new pins and vids scattered throughout the pictures.   The one thing that really caught my eye, though, was the Rally-X cabaret.  This is a relatively new addition to the arcade.  This is such a fun (and aggravating) game and the small form-factor makes a hard-to-find game even that much more valuable, as I doubt many cabaret versions were made… heck… not that many uprights (UR) were made, so the one at ZBar is a find, indeed.

I was playing a game of Bud Tapper (another new addition to the lineup) when I heard a few people walk through the door and was pretty shocked to see another KLOV/COSP member and local collector – JJ Man – and a few of his friends show up for some gaming action as well.  It turned out to be JJ’s birthday, so it was cool to see the guys celebrating and gaming at ZBar.

Check out the pictures below for a few updated game shots as well as a group shot. 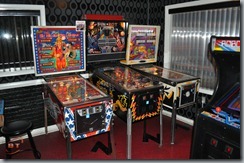 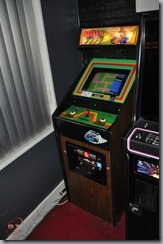 Jason was helping this little guy out so that he could play Star Wars.  I thought it was cool.

Helping to grow a new generation of retro gamers is a good thing! 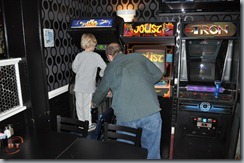 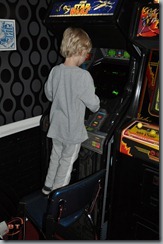 Here’s a group shot.  JJ is in the middle and I’m to his left and jbbradley is behind JJ and I.  The other two gentlemen work with JJ and were there helping with the celebration.  I think we all look pretty good considering the mileage. 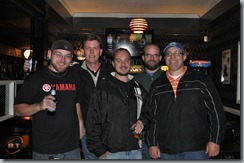 I guess this is a really long way of saying that the Louisville arcade scene – though small – is vibrant and is alive and kicking and hopefully will continue to grow.   It’s these types of impromptu events that help keep the social aspect of gaming and collecting interesting and worthwhile.   Making friends and keeping relationships established is what it is all about.  Hopefully next time we can get Antz in a picture as well.

Zbar is where it’s at in Louisville – no doubt about it.

The calm before the storm…

2 thoughts on “This is what makes this hobby fun”